Below is the conclusion to my essay “Vernaculars of Home,” in which I explore James Baldwin’s conception of language. In the essay, I argue that Baldwin’s defense of what he calls “black English” works as an epistemological and ontological account of African-American subjectivity. This account links black English to the sorrow songs, and so to long-standing accounts of how sound and musicality function as the foundation of the African-American intellectual tradition – which, in turn, links Baldwin to Douglass, Du Bois, Locke, and others. The full essay can be found HERE (in draft form, of course, with all those caveats in place). Photos in this post are not in the essay, but are included here just for decoration.

In one of the better-known passages from Invisible Man, Ralph Ellison reflects on the meaning of Louis Armstrong’s music. With this short reflection, Ellison, a life-long fan (and defender) of Satch’s music, moves from an appreciation of Armstrong as a musician and the question of voice to a larger question of how we are to locate the meaning of African-American life, its expression, and the remarkable world that emerges from – or perhaps as – a people of the margins. The reflection is at once epistemological – a question of how Armstrong’s music is an expression of a form of knowledge and way of knowing – and ontological – a description of being in an anti-black racist world – and cannot therefore be reduced to a sort of “art from the ashes” model of suffering and its expression. Ellison locates knowing and being in the aesthetic expression of the-between-as-falling-through, which is not some sort of interstitial or interval space in search of another place, but rather the breaks and cracks as such and in which African-American history and memory paradoxically sets roots, conceives space and place, and makes belonging and home.

The breaks and cracks are intended, in an anti-black racist world, to be where a Black person falls in order to never be heard from again, to be rendered voiceless and therefore outside meaningful registers, and so, in the title of Ellison’s book, invisible. But Armstrong’s music makes sound from the cracks and as the invisible, an expression that knows and that is. Ellison writes:

There is a certain acoustical deadness in my hole, and when I have music I want to feel its vibration, not only with my ear but with my whole body. I’d like to hear five recordings of Louis Armstrong playing and singing “What Did I Do to Be so Black and Blue” – all at the same time…Perhaps I like Louis Armstrong because he’s made poetry out of being invisible. And my own grasp of invisibility aids me to understand his music…Invisibility, let me explain, gives one a slightly different sense of time, you’re never quite on the beat. Sometimes you’re ahead and sometimes behind. Instead of the swift and imperceptible flowing of time, you are aware of its nodes, those points where time stands still or from which it leaps ahead. And you slip into the breaks and look around. That’s what you hear vaguely in Louis’ music.

The language of African-American life is in these breaks and cracks. Born from the experience of not just being Black and blue, but also asking why this should be, African-American expressive culture, in Ellison’s short remark, demands that it be understood in this peculiar, enigmatic non-space between spaces. Understood on its own terms, that is, and so not measured by and in comparison to the (putatively) seamless and open space of white culture. 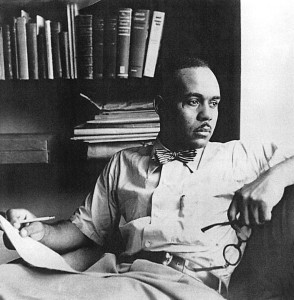 I want to evoke Ellison here in order to return, by way of conclusion, to Baldwin’s remarks on the sorrow songs and sound. The relationship between Baldwin and Ellison, which always seems to involve that other great writer of the period, Richard Wright, is too much for this brief concluding remark, but it is worth saying that Ellison’s remark puts in concise terms what Baldwin articulates across a long series of essays on the language of vernacular culture. For Baldwin and Ellison, it is not enough to say that African-American language is a language worth valuing, or that it is pragmatically important in terms of pedagogy and cultural respect – the sorts of terms on which, say, the Ebonics “debate” of the early-1990s was premised. Those are altogether different questions. Baldwin, insofar as he moves away from straightforward political debate, deepens the account of language by seeing in vernacular speech the sound of memory and history, the knowing and being that comes from asking, in Armstrong’s famous song evoked by Ellison, “what did I do, to be so black and so blue?” Why has this come to pass?

What and why indeed.

The why of a language rooted in blackness and blueness captures so much in a single word. In asking why blackness makes a world blue, survival and resistance is built into the first word of vernacular language and cultural formation. To make that question into sound is to transform resistance into the possibility of pleasure, both in the sense of the pleasure of sound (what could be more beautiful and pleasing than the sound of the choir’s telling or Satch’s trumpet and vocal?) and the pleasure of outwitting the enemy in his own language (the doubling of speech and signification). Sound and language slip into nodes, as Ellison puts it, and look around. And what is looking around, settled in a node or break, if not marking place as home? I am here and I see myself, I see you, even though you tried to keep me underground and lost in the breaks. The complication and complexity here lies in conceiving home in a place so violently hostile, from the beginning, to the very idea of blackness.

How can Baldwin posit the United States as home when the nation’s name names such terrifying space? What keeps him from the nostalgia for a civilizational past or messianic hope for a wholly new future – those signature gestures of Césaire and Fanon and their black Atlantic theory moment – in the face of such terror? The relation between language and being changes everything. If language is the house of being, and, as Baldwin argues, vernacular speech and culture welcomes and creates a people, then the terror of anti-black racism reaches a certain limit. Racism’s reach is not total. Baldwin refuses to concede to the abjection of blackness in language; if there is resistance to language as another language altogether, then the scope of anti-black racism is limited by the cultural formation of Black people by Black people. Not by direct political struggle or conflict, but by the uncomplicated assertion and defense of difference. Language is how we inhabit the world; the defense of black English is a defense of a world and the right to inhabit it. It is, as Baldwin puts it, a matter of self-knowledge. To speak vernacular culture is to know both that you are and who you are. Language as knowledge and being. Language as a whole world.