This blood, the kind that has been shed on this ground, is dark and brown and sticky. Familiar. It pools and spreads all over the floor. Reminding. It drips from the bodies of small black boys, small brown boys: from their chins, from their arms, from their feet, from the baskets they carry.

This blood, it reeks.

I went to see Kara Walker’s monumental public art installation, A Subtlety or the Marvelous Sugar Baby an Homage to the unpaid and overworked Artisans who have refined our Sweet tastes from the cane fields to the Kitchens of the New World on the Occasion of the demolition of the Domino Sugar Refining Plant on Saturday, May 31. It was a beautiful day, the kind with a cerulean blue sky and puffy white clouds you want to reach out and eat. I went with friends and we stood in line and we snapped our pre-entry photos and we signed our releases without reading them too closely.

I looked toward the exit and thought, “Why am I seeing the Door of No Return?”

Upon entering the cavernous space I was welcomed by, or perhaps just happened to be in the close proximity of, five-foot tall black and brown boys made of sugar and molasses carrying fruit and baskets filled with what I didn’t learn till reading an interview Kara Walker had done with NPR were the broken body parts of other black-brown boys. They were carrying their own. 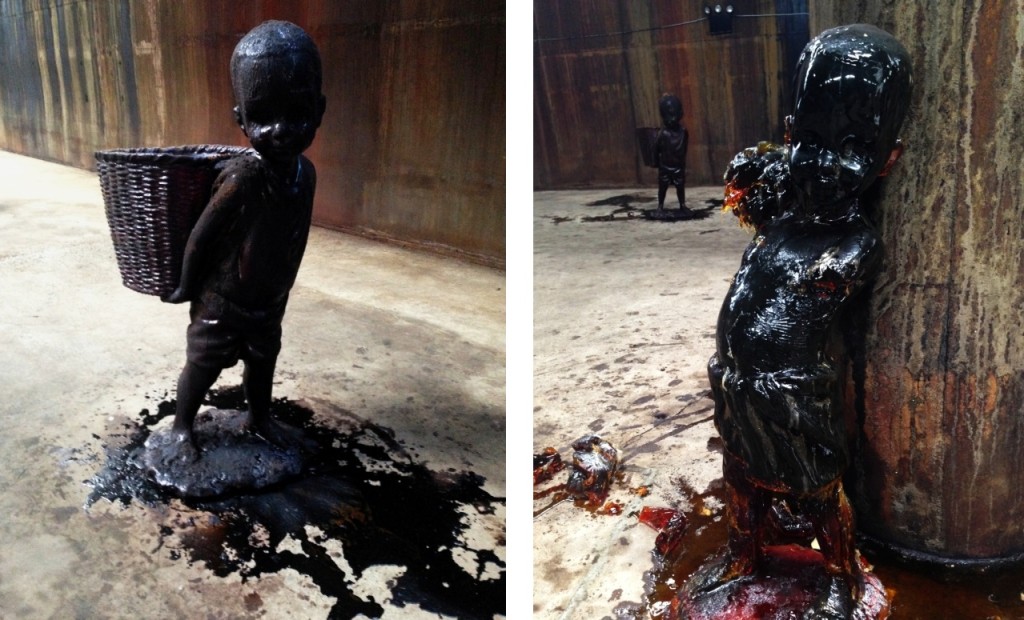 They do that, carry their own, in a shiny, melting, slow moving stillness, a modesty (not quite subtlety) that is at once arresting, peaceful, and sad. I looked at each of the boys, making my criss-crossing way from one to the next, and I was so sad. I took out my phone to take photos and was sadder still. I looked at other people looking at the boys and was the saddest I had been in a long time.

Another friend of mine who had seen the exhibition a week earlier told me that she cried when she had first laid eyes on the boys, wishing hard that she could put them back together.

When you first enter the space, you are met with a benign scent of sugar, which does its work in eliciting whatever memory it will. For me, it’s coming back from Key Food at my mom’s request and pouring the contents of a Domino bag into the twenty-year-old glass jar we still keep the sugar in at home. (Don’t forget to take out the scoop before you pour, lest it get buried down at the bottom.)

I’m thinking about my home as I’m looking at these boys. I’m thinking about these boys realizing that none of them are at my home, but they are from it. They are my uncle Ti Teyon who left a six-month growing seed in his wife’s belly and went to the fields of the Dominican Republic to cut cane, returning a few months later absolutely empty-handed, save for a small radio playing Bachata as he walked up the steps to his mother’s house. (Everyone was more than surprised that he made it back alive.)

Those boys are the ones that Edwidge Danticat writes about in her essay for Creative Time Reports, sharing some of the history of sugar in prose that Kara Walker attempts to do in sculpture.

Those boys are my father, who I may forever be grieving for not knowing well enough (if at all), who gorged himself on another kind of sweetness when he came to (maybe even before he arrived in) America and consequentially had his own life crumble away, limb by literal limb.

These boys are personal.

I know them so well, so well that I almost forget that their whole point of existence, of fabrication, is to make way for (supposedly) the Grand Poobah of this two-month long art event. Kara Walker’s giant-grand-enormous-monumental-sphinx-creature-statue-being sits there, after the boys, in all of its thirty-five foot, one hundred and sixty thousand pound glory.

As lots of people have noted, the female figure has the features of a black woman: full lips, a broad nose, a head scarf tied around her head. She is reminiscent of, but also a spectacular departure from, Walker’s past work: silhouettes of scenes from the American South, depicting a history we simultaneously know too well, yet not well enough. This giant subtlety (as in the sugar sculptures of Medieval times) sits there, several tons of bleached brown sugar, fingers of its left hand in the shape of a symbol that communicates a universal “fuck” (as in copulating, but also just vulgar language), vulva sticking up and out for all to see, photograph, react to, project on.

We are people. We make pictures.

We are people. We take pictures.

We are people. We are pictures.

As one of those bodies, black female bodies, looking at white bodies look at that giant body, I was:

but also not as affected as I thought I’d be.

I did not want to clothe her, did not want to protect her, did not wish those other people would stop looking at her. I didn’t care that one visitor wanted to send a close-up shot of the twinkling vulva to her lesbian friend. I didn’t care that Mario Batali was walking around her backside in his orange clogs wrangling his family. I didn’t even care that Anne Pasternak, president of Creative Time, was there checking in on her organization’s public art project held in a derelict space that is actually worth several million dollars.

There are several things. There are so many things about public art, big art, accessible art, made in partnership, in communion with artists who have finally “made” it and corporations that are making “it” (billions those are) and arts organizations that cop out of the responsibility (if it’s even truly theirs) of facilitating the conversations this art makes.

Kara Walker, you describe your work as a “machete,” but what exactly are you cutting?

(That is not shade. That is an actual question.)

Another question: Is the giant-mammy-sphinx, as people are so happy to name her at this point, just an enormous Trojan Horse?

Did she give birth to little soldiers in the form of those boys? Are they the ones cutting through the cane, the mess, our ease?

Does “she” truly exist as a being? Has she even been conjured that way?

There is a lifelessness in her magnitude that is deeply, perhaps purposely, unsettling. She is an it, but those boys are boys. As you get closer and closer to the gleaming monolith, the smell of melting and congealing sugar and molasses coming from the boys on guard gets stronger and stronger to the point that when you’re standing in front of Walker’s bizarro world Lincoln Memorial, everything is rancid. Everything is big and overwhelming and smells like bad, bad news.

The boys tried to warn me.

It didn’t start out that way. A few weeks ago, the Domino Sugar Factory just smelled really sweet. A few weeks ago, there wasn’t as much sticky blood on the floor trapping people in their steps before eventually letting them go. There wasn’t as much molasses dripping from the tops of these boys’ heads, not as much brown sugary sweat coming from behind the neck and knees of the great glucose sphinx.

Time passes, as it does; and these things change. Perhaps the subtlest thing about this public art installation, in which everything seems so on the nose and literal in its explication and translation, is time. In shuttling everyone into the Domino Sugar Refinery, which has its own incredible history I can’t even begin to deal with here, Walker vacuums time, stops it in its tracks, makes it possible for us to see our reflections in it—by way of history lessons through and interactions with these sculptures.

I want her (Kara and her confectionery queen) for those boys. I want her for the gift and pain of those boys. I want to put them back together, or better yet, let them melt away completely so that we’re all left there, sticking to them, to our ground, to each other, to time, to the impossibility and refusal of escape.

Diane Exavier is a writer and theatermaker born, bred, and based in Brooklyn, NY. She is a current MFA student in Writing for Performance at Brown University. You can find more of her words at leapnoonsun.wordpress.com and d-exavier.tumblr.com. She’s also on Twitter, by way of her cat Peaches: @peacheslechat. Images are author’s own.